MARION McEVOY
Broadstone Belle
12 Tracks, 51 Minutes
Marion is a sort of Renaissance woman of the arts in Ireland, being a talented singer and songwriter, but also a playwright with work staged internationally. This is the first time that I have experienced her musical output and I must declare that it is impressive with eleven of the twelve tracks coming from her own pen. An album of all new music is a major undertaking because the listener has to buy a lot on trust and a name. In this instance the trust is rewarded with some excellent tracks that will entertain but also in some ways educate as all good music should.
Black and White Lives is a case in point with heartfelt lyrics beautifully allied to the musical accompaniment. The song will enchant the listener as it reminds us of the reality of life. Marion mines the Irish past to bring events and people to life in an incomparable fashion. Oiche na Gaoithe brings us back almost two centuries to recall The Big Wind, a hurricane that devastated parts of Ireland in 1839. She incorporates the legends of mermaids and the Northern Lights into a haunting song. On the beautiful Song for Anna she brings to vivid life the work of a little known character from our history. The lady in question is Anna Parnell a great Irish activist whose life was completely overshadowed by her “better known” brother Charles Stewart Parnell. It is great to find this hidden gem of history in a diamond of a song. Her offerings here range through Irish history as well as her personal family history with songs about friends and relations including the titular Broadstone Belle celebrating her mother which is performed with a beautiful verve that can only come when one sings a song close to heart. She follows this with The Reaper a song she dedicates to her grandfather and her daughter Cathy, the latter plays fiddle to great effect on the album. The only song not composed by Marion is a beautiful My Last Song which was written by as we are told in the notes the late Mick Fitzgerald and is one of the stand out tracks in performance and production. Once again this is an album that is worth checking out, you will not be disappointed.
Nicky Rossiter

Delighted to be taking part in Cáca Milis:  The Culture Night Cabaret

As usual, music moves us through the evening, starting with contemporary songs from Wexford’s own dark lounge minstrel Fran Greene, and winding up with songstress Marion McEvoy, whose recent album Broadstone Belle is available now. We’ll have Joni Mitchell as gaeilge, as translated by Irish poet Gabriel Rosenstock and originally interpreted by Cabaret favourite Caitríona O’Leary.  We’ll have Edith Piaf in French for some European flavour, and a little Brecht.  (Not, however in German … )

With an emphasis, indeed, on Irish culture this evening, we present the show bi-lingually, and it’s with a warm welcome that we present first time Cabaret guests The Kavanaghs –a father (Daithí) and son (Rory) team who will deliver traditional sounds tonight, and provide accompaniment for the evening’s  danseuse – or rather rinceóir.

Cíara O’Grady is back, as they say, by popular demand, having wowed our Pan-Celtic Cabaret audience last year with her take on that wild and joyous strain of Gaelic expressionism:  sean nós dancing.   Riverdance it ain’t !

Return guest Seán Kiely is on the boards, too, kicking off with some much-anticipated new work.  The Cabaret Banshee just managed to nab Seán the day after he handed in his poetry thesis to Newcastle University, so get there early to make sure you catch him.

And our special guest tonight is storyteller and scribe Mary Kate Flanagan, who joins us from Dublin. A veteran of legendary spoken word phenomenon “The Moth”, Mary Kate is also an award-winning screenwriter, a lecturer in screenwriting, a short story writer and journalist.   A post-modern seanchaí with a flawless delivery – a leithéid d’aoibhneas!

Ciné Sweetcake brings short Irish film to the screen, and this time out it’s DOGHOUSE, written and directed by Morgan Bushe.  Has the recession completely screwed Doug’s life, or has he managed that all by himself?  Watch and decide.  It’s fast-paced, sharp and hilarious, and you’ll never look at a Jack Russell in the same way again…

There will be cool raffle prizes, artists’ CDs and books available for sale – come early, as due to the free admission, seats are on a first come first served basis, and are limited.

Riverwide are a seven-piece group that create a blend of bluegrass, folk, gospel, and traditional Irish music, with vocal harmony at its core. They select songs both old and new, from Irish, English and American sources, with influences including Altan, Emmy Lou Harris and Chris Smither. Each song receives the unique Riverwide treatment; melodies are intensified by three-part vocal harmony and supported by a plethora of instruments including fiddle, accordion, whistle, guitar, bass and percussion. From a cappella spirituals to all-out, foot-stomping bluegrass tunes, Riverwide take their audience on a journey through Western music and the stories it has to tell.

Marion McEvoy plays guitar with the band and will also perform a guest slot on the night. 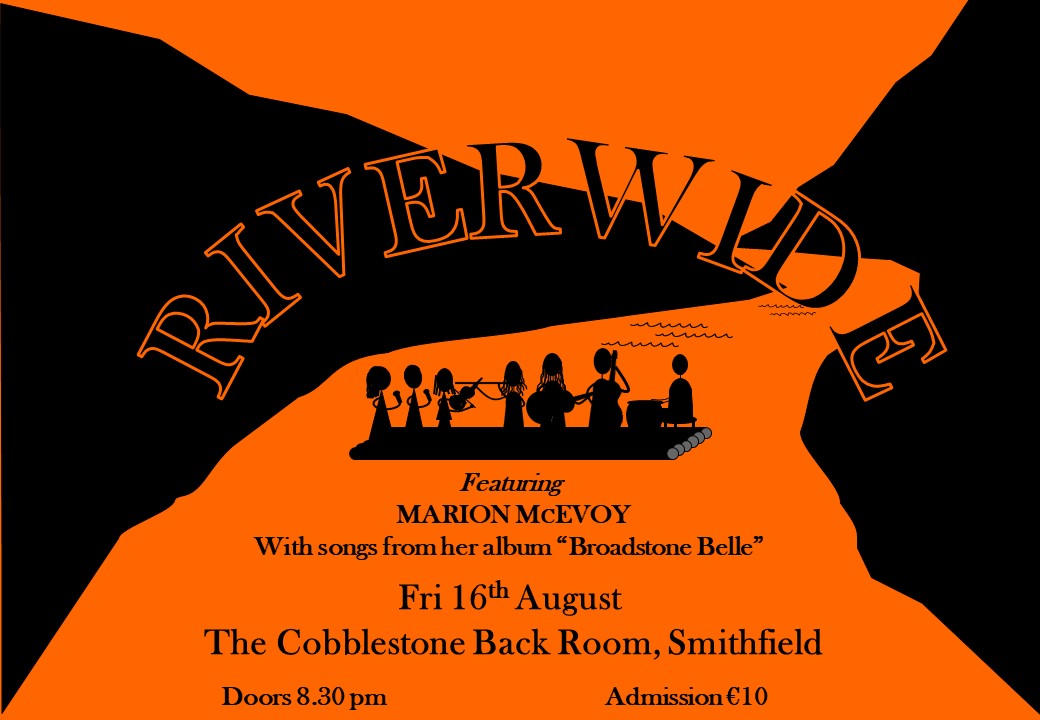 The sanity and dignity of Shane MacGowan’s response to the Fairytale of New York controversy is inspiring. He simply stated what the song was about and why the two sad and broken characters spoke the way they did. He was also big enough to say he was “absolutely fine” with the offending word being censored.

I believe Fairytale of New York is one of the finest songs (not just “Christmas” songs) ever written. Musically, it’s a masterpiece; almost operatic in its construction, from the stark opening piano phrase, to the cascading strings that play it out to the end. Lyrically, it condenses what could be a full length feature film into a four minute song. It also has that quality that to me makes a song exceptional: it can work as a stand alone poem without the musical accompaniment. Check out the spoken version  by Gerry McArdle and Colette Proctor – you’d need to have a heart of stone not to weep at the sheer heart breaking sadness of it. The inhospitable cold of the New York streets, the utter dejection of the inmates of the “drunk tank”, the shattered lives of two once optimistic people are all contained in those four evocative minutes.

Sadly, many people can hear a song repeatedly, and never really know what it’s about. The worst aspects of human nature kick in, and they focus on one line or phrase (or indeed word) from the song, cheapening it in the process. Try playing Johnny Cash’s Folsome Prison Blues, and a whole room full of punters will join in with gusto on the line “I shot a man in Reno, just to watch him die”. They’re not so quick to join in on “I know I had it coming. I know I can’t be free”. Then there are those who want the song to be about something other than what it is. Eric Bogle’s wonderful (but much mangled) anti war song “The Green Fields of France”, contains the line “I can see by your gravestone you were only nineteen, when you joined the great fallen in 1916”. This line is often bellowed to the accompaniment of much air punching and shouts of “Up the RA!” (Lads, it’s about the First World War – the bit about the gas and barbed wire is a dead giveaway.)

So while I personally don’t want “Fairytale” banned or censored, I can well understand the pain of those who do. To have a crowd of drunken, homophobic gobshites taking a line from a song out of context and using it to give utterance to their bigotry and intolerance must, at the very least, touch a few raw nerves. It’s disingenuous at best, and as long as that level of immaturity prevails, there will be demands for censorship.

Take a trip to the Fairytale hashtag on Twitter or (god help us!) to the comments sections of any online publication you care to mention and you’ll find among the genuine, sane comments defending artistic freedom, a plethora of not very articulate disparaging remarks about the “PC brigade” or the “snowflake brigade”, and some pretty hateful offensive invective directed at the gay community. Much of it concluded with the phrase “get over yourselves”. Talking about censorship, there’s a phrase the English language could well do without.

Well done Shane for your grace and magnanimity, and thank you for giving us one of the greatest songs ever written

I’m launching my new album Broadstone Belle on Friday December 14th at 7pm in the Bohemian Pub, Phibsborough! Album will also be available for download through CD Baby and partner sites.

It’s still under construction, so bear with me! Check in here for news of my forthcoming solo album which I hope to release at the end of October.

I’ve been working with some great musicians, and am really looking forward to completing the project!