Marion McEvoy has worked as a musician, composer, sound designer and performer with many theatre companies, most recently with Fortunes Fool, and with Panchord Productions.

She has written a number of plays, including her one woman show “A Portrait of the Artist’s Mother” (The life of James Joyce’s mother, May, in words and song) which has been performed in Dublin, New York, Berkley CA, Oslo and Amsterdam.

She plays with the Leonard Cohen tribute band  Tower of Song and with folk / Americana duo The Relics of St Valentine.

Marion is also a songwriter and Irish traditional musician, and performs regularly with the band, Imrama who host regular trad / folk sessions at The Brian Boru Phibsborough, and other venues. Her fascination with technology has found a creative outlet in the form of Panchord Recording Studio, which she set up in 1996. She lectures, part-time, in sound recording at Maynooth University.

In 2016 she wrote and directed music for the Community Action Network film Rekindling the Magic, directed by Paul Maher. 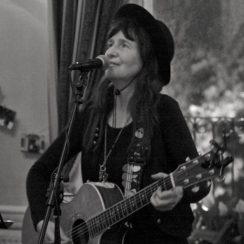